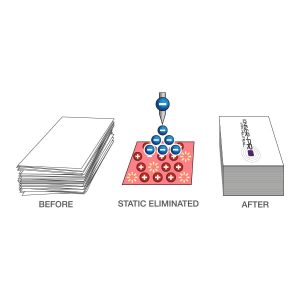 Static Build up when Printing can cause a great deal of problems.

In the realm of print processes such as screen printing, pad printing and digital printing, there is quite often an imbalance of charge between the application of the ink and the substrate which can cause printing defects. 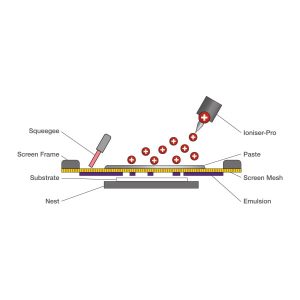 Our Advice to help with Static Elimination in Printing

To prevent static build up in standard printing, you can pass the substrate through two Ioniser-Pro static elimination bars at the feeding point. This will neutralise the static on both sides of the substrate before print begins and if needed when the finished print is about to be stacked. By placing an Ioniser-Pro immediately after the dryer, the substrate will be neutralised by simply passing under the ions omitted by the bar.

Our Ioniser Pro can also help reduce static elimination in screen printing. Simply place the product above the screen frame (up to 75mm), the bar will flood the area with ions which will neutralise the charge on an ongoing basis.

In pad printing, we recommend that an Ioniser-Pro static elimination bar is placed in the area between the pad plate and the substrate to flood the pad with static neutralising ions while the pad is moving from the plate to the substate.

Our Ioniser-Pro Pro Blow units can also be used by mounting on the walls in an enclosed area, when used they flood the area with static eliminating ions so is especially good for cleanrooms.

Ioniser-Pro bars can also be retrofitted to your machinery wherever your static hotspots are.