Static can build up easily during packaging, whether that’s blister, vertical fill packing, or bottle sleeving. The amount of static varies based on the process, but with each process you will find that static elimination can be achieved with our Ioniser Pro static elimination bars. 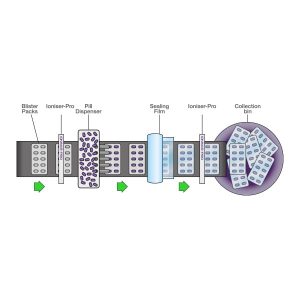 There are three main hotspots for static build up when filling blister packaging.

Firstly the empty blister pack needs to be free of static before the product is fed into it, as any static generated between the two would cause the product to jump (repel) out of the packaging and heighten the risk of dust contamination. Running the empty pack under a static elimination bar, immediately before filling, will solve this quickly.

Secondly as the sheet to seal the pack is a ‘floating conductor’ it will need to be neutralised of static prior to application, so not to attract dust or other air-borne contaminants. Running the film by a static elimination bar prior to sealing is key to fixing this issue.

The final hotspot is the collection bin which is the cause of many operatives getting a nasty static shock upon retrieval. This can be remedied by the finished, filled, and sealed blister packs passing under a static elimination bar just before dropping into the collection bin. 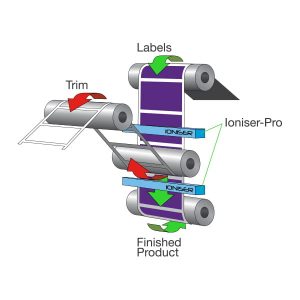 During the bottle sleeving process the build up of static can be extreme. Once the sleeving film has been cut, static builds immediately which can cause the film to prematurely stick to the bottle, causing the sleeve to fold and attract contaminates.

During vertical fill packing, static can cause the product to attract to the packaging, which can ruin the bag sealant.

By placing an Ioniser-Pro on two sides of the feeder just before the product hits the packaging, you will save the sealant at the top of the bag, prevent packing mistakes, and reduce static shock to operators collecting the filled bags.